Part 5 of my talk with Dan about the making of Apologies:

After ATP we toured our way back to Montreal. And that tour was fucking insane. It was everybody in the van. No one was coming to the shows. This is November 2004. So we played these small clubs that were huge distances from each other on a routing that would eventually get us back on Montreal. We played a terrible show in Phoenix where no one showed up, then drove to Denton, Texas and played an 80’s night between DJ’s. Our next show was in St Louis and that was kind of the nadir of the trip. It was our last show before we were supposed to go home. We played a show in Arkansas where Hadji passed out at the show, literally fell asleep on stage. We were just ground down. We had literally been out for over a month at this point, all of us getting pretty feral. I think the worst part of that whole thing, which started with us driving out to Portland to make the record, was when we played in St Louis at the Rocket Bar. That venue is basically the downstairs is the bar, there was a little step down to the bar and that’s where all the locals hang out. But if you pay a cover you could step up these tiny stairs and go see a band. The people that don’t pay cover are still in the bar and maybe they’re heckling you from there.

So we played with two of the worst bands I’ve ever played with. One of them was this jock dude singing joke songs. Everyone hated him. The other band was this sort of polished older pop punk band. That clearly had their sites set at one point on being like Green Day or Pennywise, but hadn’t made it. They were in their mid 30’s and I was just like, this is really depressing. I didn’t want to play the show and Spencer really didn’t want to play the show and we had a pretty heavy-duty internal band conflict about whether we should play or just drive away. We ended up playing and then immediately drove back to Montreal. Without stopping, from St Louis. I think 10 hours after that show, on our way home, Ol Dirty Bastard died. Arlen and I were the only people awake at the time and we heard on the radio that Ol DB had died. We had all these left over fireworks from tour so we just went out and shot fireworks over some miserable fucking gray field outside of Detroit.

Fancy Claps was amazing live, especially when coupled with ‘You Are A Runner..”. This video is a perfect example:

Brittany Scheffler submitted this incredible cover and write up:

For a long time, I have considered Fancy Claps my favorite love song. Maybe that’s a little strange considering the energy of it – frantic, urgent, morbid. But I can’t think of a song that better communicates the experience.
I wrote a journal entry in April of 2012 about the album and this song in particular, here’s a cut down version of it:

“…And I was so sad because I thought I’d never be able to talk to him about Wolf Parade. Fancy Claps. How much it meant to me. How I could feel myself simultaneously shattering and spasming, heartbeat up, this is how you made me feel…I said it was about how morbid love is, and I guess there’s some truth to that, but that makes it sound different than I want it to. Love outlasts death, so ultimately the two things have to be linked, however tenuously. But in a good way, that rendered me fearless of all except having to live without him. But you can’t live in fear of that. What I say doesn’t matter, all of it is wrong. The song is there for that. And it speak for itself…Skimming the surface of infinity.”

I’ve wanted to do this cover for a while, but I felt like I was doing a disservice to it, because to me, playing this slow kind of cancels out the point of the whole thing. It loses its sense of urgency. But it gains something else, I think. Maybe this cover can be symbolic of how I’ve calmed down a bunch since I was an intense 16 year old. I hope I still have the same depth of feeling.

Thanks Wolf Parade, thanks Spencer, thanks Venus (the planet). Photos by: At Least Enough to Cary On 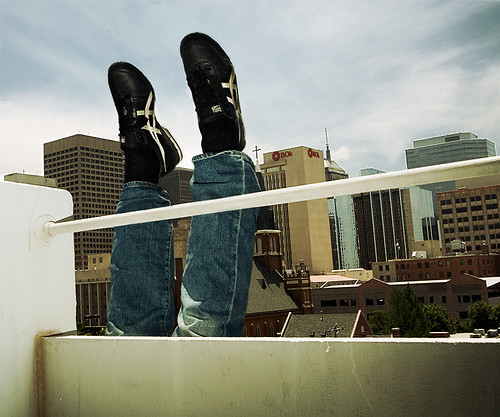 “When I die, I’m leaving you my feet”
Photo by: Joseph Russell

At under 3 minutes long I could listen to this 500 times a day. Fancy Claps by Wolf Parade http://t.co/QfMW0WrVQd

Wolf Parade made of rainbows & hallucinogens! Full discography on shuffle = pure joy. Live mashup of "You Are a Runner/Fancy Claps" = !!!